10 Things to Eat in Mexico (and Where) 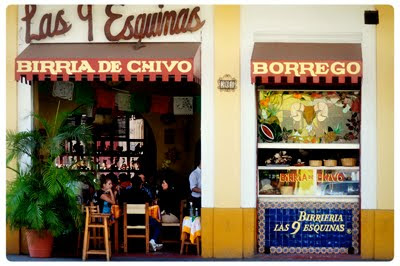 In the spirit of helpfulness, I offer here a few pointers for good eating in Mexico. I know many writers have penned numerous invaluable tips of where to find the 'best burritos in town (huge portions!)', or who makes the best pizza in Cancún, but assuming for a moment you would like to eat typical regional food while you travel, look below. This is a guide for the uninitiated and doesn't go into chapulines (fried grasshoppers), impossible to find tamales made by someone's grandmother or anything else that is not straight forward. If you want to be more adventurous, try something else on the menu from the same eateries. Suggestions follow each listing.

So, in no particular order, here are some regional specialities not to be missed and places where you might find them. If possible, I have included a vegetarian dish and a fruit or other item specific to the region listed. And for those with language or custom difficulties, see the bottom of the page for a few hints on dealing with the ordering process.

1. Quesadilla con flor de calabaza
Blue corn tortillas stuffed with squash blossoms
MEXICO CITY
Any given taqueria, mercado or street corner or will have these almost year round. Expect an elongated tortilla of blue masa freshly made and stuffed with lightly cooked squash blossoms and onions. You will likely be asked, "¿con queso?" ("with cheese?") and the answered is certainly yes. Simple, wonderful and truly one of the delights of Mexican cuisine.
From the same stall: quesadillas of any given filling, all wonderful. Champiñones are a favourite.

2. Tacos al Pastor
Shepard's Taco
PUEBLA
This chile and spice marinated spit roast of pork has multicultural origins which you can read about here. It is certainly as delicious as it is ubiquitous, and that is saying something. Topped with roasted pineapple, diced onion and chopped coriander with salsas of your choice.
From the same stall: Alambres, chorizo, frijoles charros. 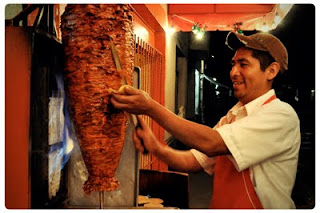 3. Jugo de Naranja
Orange juice
MEXICO CITY
Sounds stupid but seriously, go to a mercado juice stall and have the best huge orange juice of your life for a dollar. It will remind you why there is a huge demand for the horrible junk sold in supermarkets now.
From the same stall: Liquados with papaya, any drink with guanábana.

4. Tlayuda
Tlayuda
OAXACA
Basically a giant, slow-cooked tortilla topped with bean paste, Oaxaca cheese, tomato, avocado, and a feature ingredient (marinated pork, chorizo etc). Tlayudas are either open faced–a local girl used to joke that they are Mexican pizzas– or folded to serve. At 12" across they are a good size meal in themselves, but moreover they are delicious and at best extraordinary.
From the same stall: Tacos de cecina.

5. Frutas
Fruit
ANY AND EVERYWHERE
Vitamins have never been more attractive (a sentiment that will only be fortified by a few weeks of the meat and cheese diet of eating out in Mexico), tastier or fresher. Mangoes and bananas you will recognise, but also try granadillas (a hard-shelled relative of the passionfruit), chirimoya (custard apple) or tuna. Tuna is the fruit of the nopal catus, definitely not aquatic, and a popular flavour of nieve as are many of these fruit.
From the same stall: anything. Ask if the fruit is ripe ("madura") and be adventurous. 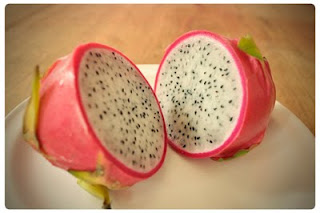 6. Tamal
Tamale
OAXACA
As the land of the seven moles you could fairly expect Oaxaca to have some very tasty mole-filled wonders, and they certainly do. The texture of Oaxacan tamales tends to be smoother than in other parts of the country. Try either mole negro or salsa verde tamales at the tamale stand at the Sánchez Pascuas market, located seven blocks north of the Zocálo between Porfirio Díaz and Tinoco y Palacios.
From the same stall: cambrays, which are sweet tamales with butter and raisins as the filling.

7. Panuchos
Panuchos
CAMPECHE
Fry tortilla dough, stuff it with black beans, top it with pulled pork, avocado, tomato and pickled onions then a little habanero sauce. Then, try and say no to it. I have trouble saying no to the fifth one.
From the same stall: Salbutes, which are similar but made with chicken.

8. Birria
Steamed Mutton Stew
GUADALAJARA
This old favourite is a preparation of lamb leg, marinated then steamed till falling apart. The resulting dish is the tender lamb in the broth saved from the cooking. Always pretty good, but never quite as good as at Birreria Las 9 Esquinas.
From the same stall: Barbacoa, pozole.

9. Pavo en Escabeche
Turkey in a piquant broth
MERIDA
This delicate broth is the result of slow cooking turkey with aromatic spices and a good dose of sage, then brightening the dish with a splash of apple vinegar. A clean and refreshing dish, without too much spice.
From the same stall: Relleno negro, pappadzules.

10. Caldo Tlalpeño
Vegetable soup, Tlalpan style
SAN CRISTÓBAL DE LAS CASAS/MEXICO CITY
Very loosely, this soup is vegetables cooked in broth and served with a little chile, avocado, coriander and lime. It is truly a remedy for body and soul. The best in San Cris and possibly anywhere else, is found at El Caldero.
From the same stall: Sopa Azteca, mondongo, el caldero. 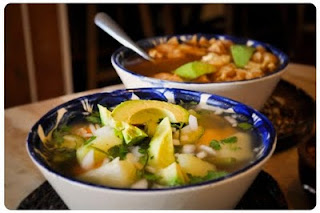 11. Nieves, Paletas, Helados
Frozen sweets of all sorts
EVERYWHERE, ESPECIALLY CAMPECHE
How could I leave it at 10 things without these? Fresh fruits, chocolate, cajeta, mescal or even tres leches are all here, sweetened and frozen. Guanábana and coconut are just awesome (not as in 90's talk Awesome, but as in they fill you with awe) as is nuez, and pretty much the whole gauntlet. Paletas come both water and milk based (de agua or de leche respectively), and some of the Ice-cream stores have started making their helados with weird emulsifiers so try to stick to the little guys who do mostly hand-made.
From the same stall: Horchata, agua de jamaica, horchata de fresa. 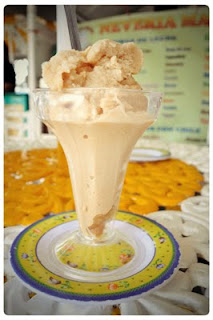 A note on market and street stalls:
As the guide books do quite accurately state, busy ones have the cleanest and safest food. What is harder to figure out sometimes is how to order. You must move as close as you can to the people serving without pushing in and ask, "¿Que tienen ustedes?" (what have you guys got?). You will be provided a brief verbal menu, from which you might settle on say, a Tlayuda of grilled beef (tasajo). You would then say, "Me da una Tlayuda de tasajo por favor" (give me a grilled beef tlayuda please). They will prepare your food, serve it to you and only upon leaving will you need to pay. You might well say, "Provecho" (enjoy your meal) to the other diners as you leave, as is customary in Mexico.
Posted by Travis Harvey at 11:18 PM