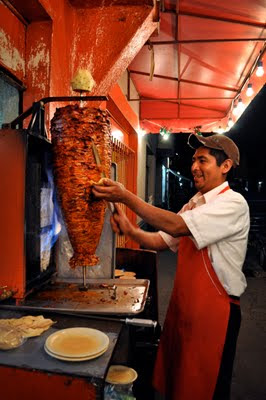 The red street taco of Mexico city is at once ridiculously tasty, a carnivorous spectacle and a convergence of cultures. When the Spaniards arrived in the New World in the 1600's, they found an incredible variety of ingredients to embrace and share with Europe (chocolate, chile, tomato, vanilla to name but a few), and brought with them something that would be amorously consumed by Mexicans to this day: the pig.

This simple recipe of pork, chile, achiote and a pinch or two of other things really is the flavour Distrito Federal, and in more than one way. Take pre and post Columbian flavours, let them mingle into something fantastic, then fire-roast on a huge spit in the style of the city's Lebanese immigrants. In fact, the spit was originally packed with lamb, hence the name Tacos al Pastor, or The Shepard's Taco.

So here it is in all its glory, a recipe for a real Mexican's taco. If you're lacking in the necessary equipment to spit-roast 60kg of pork, this method and a BBQ will do a pretty good job. 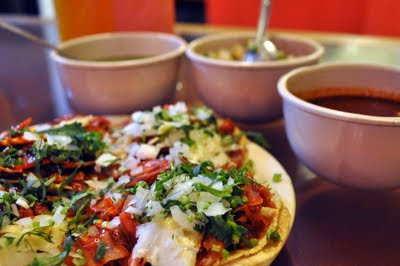 Method
To make the marinade, split the chile Guajillo lengthways and soak for a few minutes in warm water. In a blender, place a third of the pineapple, half the onion, garlic, achiote, orange juice, vinegar, salt, oregano and the softened chile. Blend until you achieve a smooth paste.

Combine the pork with the marinade in a large bowl and work the meat a little to coat evenly. Leave to marinate a few hours, or even overnight.

Slice the pineapple into rounds and chill.

On a very hot BBQ, grill the pineapple rounds until slightly charred, reserve. Grill the pork steaks until cooked through, place on a chopping board and cut into small rough pieces. Chop pineapple into the same size pieces.

Assemble from the plate upwards: tortilla, pork, pineapple, onion, coriander and salsa of your choice. Find recipes here for x'nipek, salsa roja or salsa de aguacate. A customary squeeze of lime brightens it up a touch too.

Usually we would eat around eight of these in a sitting so either make a whole heap, or choose your friends carefully...