How to Make Tortillas 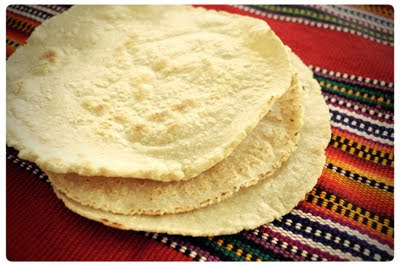 There are few more potent symbols of Mexico than the corn tortilla. Both socially and gastronomically, it is no less than a cornerstone of indigenous and mestizo culture. It also serves as a class divider (known as the tortilla curtain) as the Spanish-descended upper class have historically consumed Europe's sometime emblem, bread. And like most peasant food, when tortillas are good, they are great.

Over 300 million tortillas are eaten each day in Mexico, and I suppose if you are reading this you may have contributed to that figure. You may also be one of the many who have tried to make your own, only to find the result to be more like an atheist's proof that indeed, God does not exist. Stodgy, raw, tasteless and rubbery are all apt words to describe failed attempts at tortilla production.

The following is by far my most requested recipe, though as you can guess there is not a whole lot to it. That said, there is not a lot to making them awful either, and I have included all the things to look for to ensure you are proud of your little corn cakes. It is one of life's wonderful mysteries how such a small margin in technique can produce such a huge difference in result, a question that has spawned much philosophising. I will spare you my own here, but do heed the following words and you might just see the meaning of life for yourself. 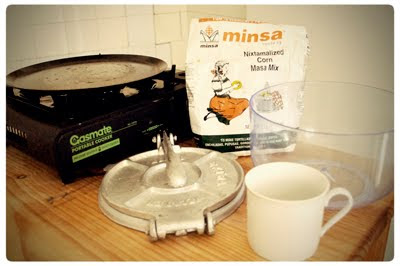 Comal, tortilla press, Minsa, mixing bowl. All you need is a little water and a little patience.

The Making
1. Mix two and a half cups of Maseca* with two cups of warm water. Mix well by hand, and make sure you knock all the air out of the dough (it will be quite aerated and wet to begin, so just keep working it). This will take 2 minutes or so. If the masa sticks to your hands, add a little more Maseca and work until it forms a smooth dough.

2. If the dough cracks, it is too dry, add a little water and let sit. Press your thumb into the masa to check the moisture level. The thumb should leave cleanly, without cracking or effecting any untouched areas. Leave the masa sit for 1 hour. This will properly re-hydrate the corn flour so the tortillas wont crack as you cook them.

Too dry, then just right.

The Cooking
1. Make a golf ball sized portion and roll it in your hands until smooth. Place the ball between to sheets of plastic on the tortilla press and flatten gently (note: in Mexico, plastic shopping bags are exclusively used for this task. They are in fact the best thing, as they have a little give in them and wont create folds like silicon paper tends to do). Flip the tortilla over and press gently on the other side.

4. Remove the top plastic layer, place your right hand on the left side of the tortilla and pick it up. Remove the remaining plastic and with your palm facing upwards, lower the tortilla onto the comal. The hand motion required is to move your arm away from your body whilst swivelling your hand from palm up, to vertical, to knuckle up. Simply put, it looks like a backhand stroke in tai chi.

Laying it down and puffing it up: a clay comal is best, but here I am using a carbon steel pizza tray as it's much easier to come across. Carbon steel won't sick or warp, and has fairly even heat conduction. It also handles tomato and chilli roasting very well.

5. Cook the tortilla for 30 seconds on the first side then flip it over. Let cook for one and a half minutes on the second side, then flip again. All going to plan, you should see the tortilla puff up now, and this is the mark of a well made tortilla. Cook a further 30 seconds before removing to a cloth or towel. Keep the tortillas wrapped so as to not dry out. They may require reheating before serving.

*A quick note on the raw product, I don't think there is any huge difference between Minsa or Maseca -the two major brands of exported tortilla flour- but many people think Maseca to be a little tastier (nothing compares to fresh masa for taste or texture, but it is quite impossible to find outside Mexico). What I can say is that the instructions on both products are overly simple, misleading and disappointing. Just get a few tortillas right, get a feel for the heat of the comal or pan, and more importantly the feel of the masa.
Posted by Travis Harvey at 3:04 PM