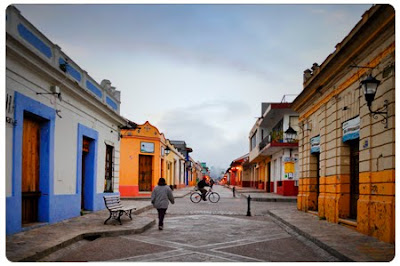 Living at an altitude of 2100 m (6890 ft), I suppose one should learn to make a very good broth. San Cristóbal de las Casas sits precisely at this height, and though close to the equator, the city still suffers incredibly cold nights (which surprises many tourists, resulting in a booming trade for scarves and sweaters). Some years ago I very briefly lived in San Cris, but the decidedly spartan surroundings I rented precluded any great broth production, since I was equipped with little more than a saucepan and a flame.

Moreover, a ten minute walk and a five minute wait would get me a huge portion of any one of the amazing soups from El Caldero. They boast a simple menu of eight caldos and little else, the secrets of which I have tried to procure since the first bowl. When we returned the other day, the Señora clearly remembered me and my efforts to wrench the truth out of her. She also continued to avoid any commitment to exactitude, knowledge of specific chilies, or any prolonged conversation on the topic.

I don't mean to sound so ambitious or obnoxious. The truth is that I like talking to her, and I guess she is quite flattered with my near half-decade of persistence. Anyway, at a rate of one ingredient divulged per bowl I've eaten there, I have figured out four and a half soups and have my own versions of the rest. The two we had the other day were the Caldo Chilango–a variation on Sopa Azteca–and Caldo Tlalpeño: a broth with shredded chicken, vegetables, chayote, lime and chipotle.

The Caldo Tlalpeño can be composed in a number of ways, some with a spicy broth and many with chick peas as a main component. The simplicity of El Caldero's Tlapeño appeals to me, because it needs no more than a well made stock and good vegetables to be incredibly satisfying. Incidentally, the name Tlalpeño denotes the soup's geographical origin of Tlapan, the largest borough of the Federal District of Mexico City. The word Tlapan comes from the Aztec tongue of Náhuatl and means "on the land". Here, I offer my own humble recipe of the good Señora's life-giving soup. 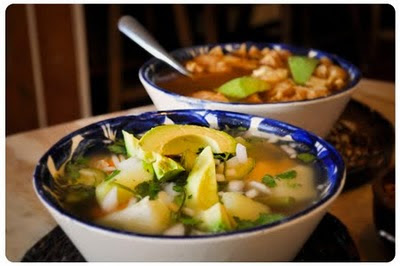 Caldo Tlalpeño with Caldo Chilango in the supporting role.