With a little bit of luck... 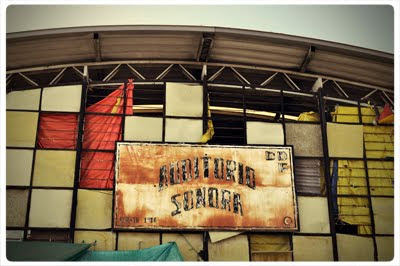 I have always supposed soap to be quite a good thing, of large practical consequence but of little spiritual measure. As it turns out, this is simply not the case. The former assumption is patently clear, but the latter is more a question a symbol, and how it can inhabit a peculiar place in our daily lives. Take the rather heavily scented objects you see below. The blue bar promises to boost the trade of your business, the other offers no less than to triple your luck (the variety of said luck was promised to be general). In the daily life of a resident of Mexico City, these symbols can be worth collecting. 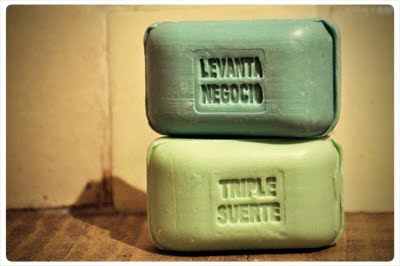 Scented and pressed palm oil blocks to wash the blues away. 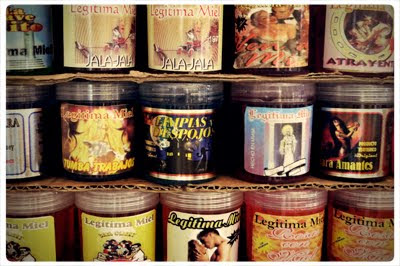 Syrups and honeys that produce love, reduce hauntings, or even get that rich client to call.

These are the kind of items you will find at Mexico City's Mercado Sonora. Amongst caged birds, glazed pottery and cheap toys resides a huge outlet of commodified luck. Sachets of love powders, aerosols of atomised spells, luck soaps and success perfumes are just a peek into what goes on here at Sonora. Bunches of medicinal herbs and seeds occupy a large proportion of the market, as do statues of Santa Muerte and scented candles.

The function of most of these items is quite within the realms of reasonable demands: to help your grades at school, calm a jealous boyfriend or help you meet your debt payments. Though these are far from the biggest problems people face here. The current state of affairs in Mexico spell hard times, at least for those on the lower rungs of society. The economy has shrunk by 7% in the past year, and poverty rose for the first time since the mid nineties. Tourism crumbled after the H1N1 virus (which is now known to have originated north of the border) was renamed the Mexican swine flu, and the drug wars claimed yet more lives. 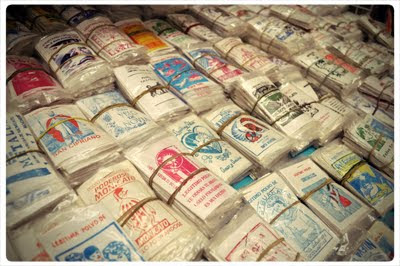 Supernatural powders to rid you of jealousy, begin a friendship or help you with your studies.

As such, it isn't too much to ask for a little help and many do. So nearing the eve of our return to Australia, we thought we would do the same. The preparation and use of the herbs are somewhat beyond both our needs and the facilities in our Mexico City B&B, so we opted for the soap as advised. In their little boxes adorned with promises of more secret herbs and spices than you can poke a Colonel at, they looked quite promising.

Unfortunately, we had to put them outside our room after taking the photos of the unwrapped specimens as they seemed to be inspiring some fairly serious headaches. Only minutes later as the pain started to leave and the clouds parted, I could barely believe it. I was getting luckier already. 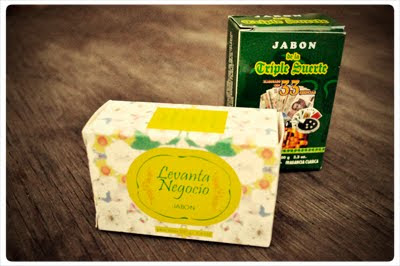 Posted by Travis Harvey at 6:29 PM