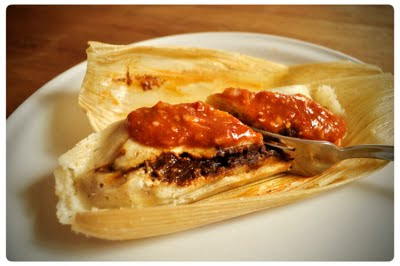 Three and a half years ago I spent my very first day in Mexico sweating, eating tamales and then sweating again–from both the heat and the salsa roja. I was in La Paz, Baja California with my brother and a friend, and we had not the slightest clue what was going on. Everyone was ten inches shorter than we'd expected, the language I thought I had a handle on was suddenly as useful as sanskrit, and none of the food looked anything like it's gringo representations. (Though the most startling element was the style of marketing endemic in Mexico, whereby a monstrous speaker is employed to pulverise the customer's auditory canal with reggaeton while they choose a new pair of socks, a child's toy or crockery set. As any traveller to Mexico knows, the key is firing up the speaker at eight in the morning, then running it ragged until the music is quite distorted. There was one stationed about 20 feet from our hotel room.)

Of course, they are not all wrapped in corn husks. Many are steamed in banana leaves and a small few are baked without a casing. The diversity of fillings is more striking, and can vary from beans and chiles to mole poblano, salsa verde with pulled pork or just herbs and cheese. Then there are sweet tamales, like those coffee and cinnamon scented delights in Chiapas, or the buttered rice-masa with raisins here in Oaxaca. And beyond the joy of eating them, they are quite fun to make.

I've tried my hand at them a few times, with varying degrees of success. This last batch was the one where it all came together. The filling is key, but the all important point is the masa and how you treat it. The following tamales were filled with pulled pork and mole poblano, the second type salsa pepian and black beans. There is nothing extraordinary about these sauces, any of the mole recipes from this blog will make a good filling as long as they are well seasoned. 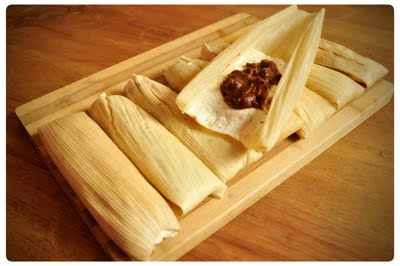 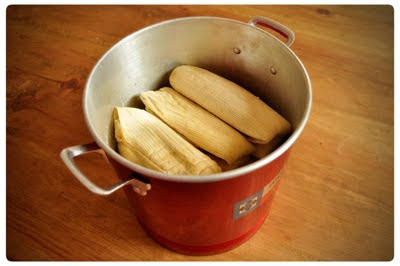 *If you are making masa from dehydrated corn flour, using the pork stock in place of water will improve the flavour considerably. In this case, reduce the additional salt to a single teaspoon.
Posted by Travis Harvey at 4:34 PM