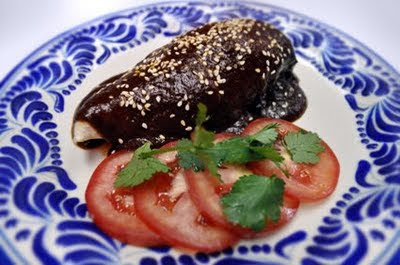 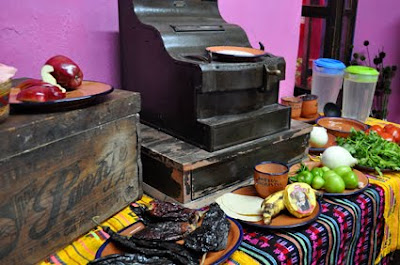 This week something a little more useful: the justly famous chile and chocolate mole of Puebla. National dishes often have back stories and folklore that cement them into the public consciousness, often they are certainly apocryphal but serve to give character regardless.

But first, for newcomers to Mexican food, what is a mole? Mole (pronounced mo-lay) is basically a sauce which can be loosely described as complex in flavour and thick in consistency (as apposed to a salsa, a sauce whose consistency is watery, un-thickened). The word mole means "concoction" more or less, as in our familiar friend guacamole, and is etymologically rooted in the Nahuatl word "mulli" or "milli". This word gives rise to our first legend of the origin of Mole Poblano: that our Nuhuatl speaking Moctezuma served mole to Cortez and his soldiers, thinking Cortez was the returned God Quetzalcoatl.

The second story similarly features a religious theme: an angel appeared to 16th century nuns of the Convent of Santa Rosa in Puebla as they roasted, ground and chopped an array of ingredients to create a meal for the impending arrival of the Archbishop. They served the chocolate sauce with turkey (another ingredient native to Mexico) and a national dish was born.

Other legends include cranky priests, chance gusts of wind and other factors that fail to explain the considered complexity of this sauce. Indeed, what this dish should achieve in its balance is an earthy bitterness from the chocolate and burnt tortillas, sweetness from the chiles and banana, a savoury base from onions and garlic and finish with just a suggestion of heat from the chile. The consistency of the sauce is ultimately quite thick and luxurious, with the strongly-flavoured ingredients becoming delicate and nuanced.

Though Mole poblano can often contain up to 35 ingredients, this domestically achievable version – one which retains the key flavours of the true Mole – is based a recipe from Alonso Hernández, Chef at the Meson Sacristia in Puebla.

Split the dried chiles and remove the seeds and stem from each. Open and flatten the chiles, then gently fry them for around 5-8 seconds on each side, much in the same manner as you would fry a pappadum. This heat activates important flavour compounds that are lost in the dried chile. While the oil is still hot, peel and halve the banana lengthways and fry until golden brown. Reserve.

On a comal or skillet dry-roast the tomato, onion and garlic until soft. A slightly charred skin is desired. Place the toasted ingredients in a pot with the chiles and two cups of water. Bring to the boil and simmer gently until the chiles have softened (around 10 mins). Puree the pots contents in a blender, a little at a time, then strain the mixture through a sieve and reserve.

Place the tortillas directly over the flame and turn them frequently until they are completely charred. Blow out the likely burning tortilla (quick prayer to the rain gods to break the drought) and blend with 1 cup of water and the fried banana. Pass through a sieve and reserve.

Take a small amount of the vegetable oil and heat in a medium sized clay pot if you have it, otherwise stainless steel is fine. Introduce the tomato based sauce slowly and fry until boiling. Add the banana sauce and stir. Lower the heat and add chocolate, sugar and salt. Reduce for 25 mins, stirring to make sure it doesn't stick until the sauce has thickened and darkened considerably.

Mole Poblano is commonly served over poached chicken, but goes wonderfully with the sweetness of most any bird; turkey is a classic, and duck really brings something else to it. Garnish with sesame seeds, serve with a side of longrain rice and a stack of warm tortillas.

Notes on the recipe:
Those wanting to avoid too much sugar might try a second really ripe banana. Those lacking corn tortillas might try dark roasting some good bread if need be. Those lacking all three types of chile might try using two types but the same quantity, 5 in total. You cannot, however, use any other type of chile.

*Good dried chile can be hard to find in Australia, but you needn't look further than the lovely Marycarmen at Fireworks foods in Sydney. She has a great mail order service, and what her site lacks in modernity is made up for in great range, prices and service (her mobile phone number is listed on the site). Try her here http://www.fireworksfoods.com.au/

Another location worth trying might be The Essential Ingredient http://www.theessentialingredient.com.au/
Posted by Travis Harvey at 4:07 PM