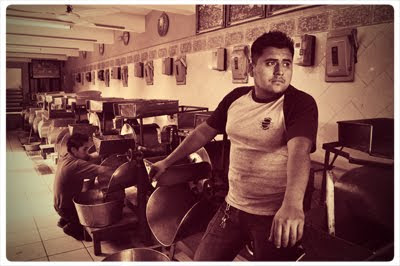 Tomes have been written on chocolate's history, culinary influence and botanical origins. After years cooking, selling and reading about the stuff, I could do little more than a disservice if I tried to condense even a portion of all there is about chocolate here. But there are a few things worth mentioning, and you'll see how I make my own at home.

Anyone subjected to advertising in the last 20 years will have an inkling that chocolate has some sort of relationship with a civilisation of the Americas, one which certainly boasted some very attractive and athletic physiques, and shared a fondness for consuming chocolate bars wrapped in foil and coloured paper. And though advertising–especially when engaging its anthropological prowess– usually gets everything 100% right, there are a few notions astray here.

Our nameless civilisation suffering portrayal was most likely supposed to be Aztecs, who are too often credited with chocolate's initial usage. Due to the fact that the Aztecs had a formidable nation intact when the Spanish arrived, they authored much of Mesoamerica's pre-colonial history simply by being the ones to tell the story. Thus, they managed to attribute quite a few achievements attained by other cultures to themselves. The Aztecs had in fact left their homeland in the north only 4oo years earlier and had ruled Mexico for less than 100 years, thousands of years after chocolate had migrated from it's home in the Amazon basin.

In fact, the Maya were fundamental in cultivating and exploiting the wonderful properties of this fruit. The Popol Wuj (the Mayan book of creation) contains a number of references to chocolate in the form in which it was used in Mesoamerica at the time, as a sacred drink and as currency. It was in fact the Maya who had first shown the Spaniards the bean they knew as kakaw, the name which is the etymological root for our own word today. Further linguistic studies have shown the word kakaw to be Mixe-Zoquean in origin–a group indigenous to the north of Oaxaca–suggesting that if they donated the word they most likely donated the substance it describes.

And so it comes full circle, since Oaxaca is renowned for the quality of it hot chocolate to this day. The city boasts hundreds of molinos from which you can purchase freshly milled chocolate nibs, or as I do, take your own mix for them to grind. Its quite a fragrant process to say the least, and since I got the scoop on the secret ingredients from my sweet abuelitas in Guatemala, it's very much worth making my own. 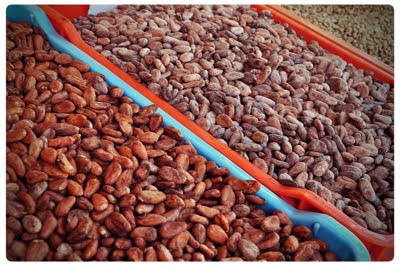 I start by buying very good beans. To be honest, I find the best way to choose them by looking at the other products being sold and assuming the quality is consistent (i.e. you can easily tell if a chile ancho is plump and shiny, vanilla pod moist or pecans well formed, whereas cocoa looks fairly similar. Unless of course, it looks shabby). Now I have my chocolate lady, that's it. There will be no other. 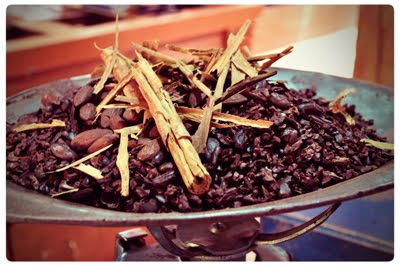 My toasted and peeled beans, weighed out with their particulars.

I roast the beans on a comal before shelling them, weighing them and taking them to the molino. My mix gets a kilo and a half of sugar to a kilo of cocoa. This is regarded as bitter-sweet in Mexico as most chocolate runs at a mix of two and a half to one. Add 50g almonds and 20g cinnamon quill and run it through the coarse molino, mix the sugar in and then run it through the second molino on a finer setting, and there you have it. It is hot and runny from the friction of the granite plates, so it's poured into a bag, taken home, mixed with the secret ingredients and pressed out into a tray. Just before setting, I run a paring knife through the mix to portion it and let it cool completely. 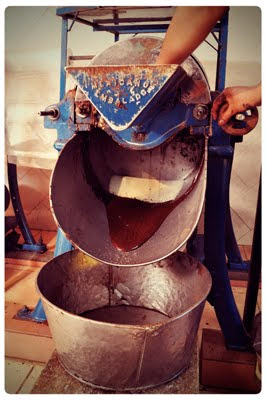 Willy Wonka's first job at the molino in Oaxaca. This is the chocolate with nuts and spices added, about to be mixed with sugar.

If you want to try it, please book a class with us. If you want to know more about chocolate, check out The True History of Chocolate by Sophie D. Coe and Michael D. Coe, or wait for our book to come out... 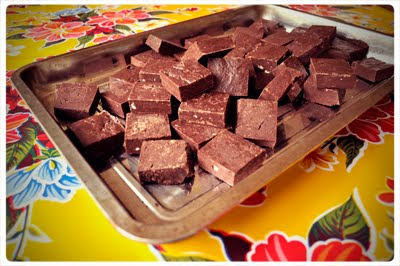