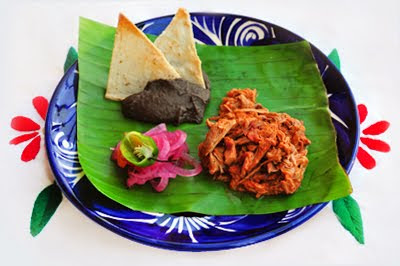 The final product, Cochinita Pibil. I served it on the banana leaf because it reminded me of presenting restaurant food in the 90's, and because it took two hours of walking around Oaxaca last Saturday to track them down.

In the mythology of the Maya, Itzam Na was the name given to the rainmaker, creator of all men. To avert agricultural disasters, offerings would be made to Itzam by digging a pit two feet deep, filling it with hot stones and performing ceremonial cooking. In a "pib", the Mayan earth-oven, the food is wrapped in banana leaves then covered with the broken soil for slow cooking resulting in a flavour and texture that is incomparable.

Cochinita pibil is the traditions most famous dish, indeed it is still commonly prepared in villages in Yucatan today–if in a somewhat more secular fashion. Interestingly, since the pig is an immigrant to the Americas, cochinita pibil was certainly never prepared before the arrival of the Spanish. A more likely substitute would have been turkey, fish or venison, all of which where plentiful in the peninsula. Incidentally, cochinita refers to the diminutive form of the Mexican term for pig, coche (Ko-Chay), therefore "little pig", and pibil to indicate its method of preparation.

In conclusion of the ceremony when the dish was ready, the priest would again speak to the creator of all men, now embodied in the earth. Before disturbing the oven to remove the goods, he would cry, "Open your mouth, Itzam. Lo, it is broken apart". When mine was ready, I said something similar to my nine-litre convection oven. And I didn't feel silly in the slightest. 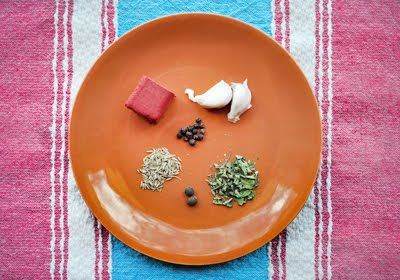 Paste spices before roasting and blending. 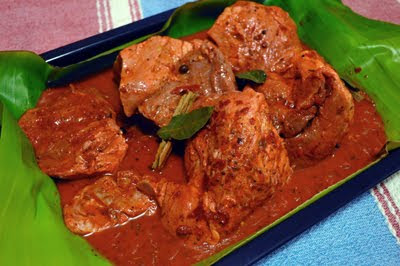 Moments before going in the oven.


*If you don't have have time to get the pork marinated 24 hours in advance, simply cut it into 4-6 equal size pieces like I did. This will increase surface area for the marinade to penetrate, so you can halve all the marination times–ie. 12-6 for citrus, 3 for paste.
*If you don't have banana leaves, just go without. They do impart a wonderful flavour, but it is still a stunning dish in their absence.
*If you don't have a cast iron pot, just use a tray and seal it well with foil, as I did.
Posted by Travis Harvey at 7:27 AM