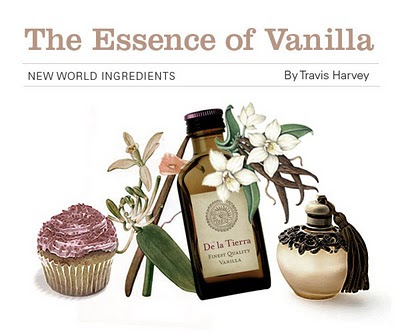 The first in a series of articles on ingredients native to Mexico.

Standing on the lush rolling hills of Gutierrez Zamora, Mexico, I was given cause to consider when I had first become acquainted with vanilla. Profoundly, I realised that I could draw direct line from it’s saintly aroma, to the life that I lead today. You see, my invitation to start cooking didn’t appear in a newspaper, as an ad in a window or from a well-meaning friend. Like many of us, it came from my mother many years before and if it had a perfume, it was certainly vanilla. The scent of cakes, custards and ice-cream that she sent through the house excited me so that I would lose my thoughts for anything else. As the convection oven hummed it’s promises and I licked spoons and bowls clean, my friendship with the little black pod was forged forever.

Vanilla is surely the most romantic and seductive of the spices. With an incredible flavour profile that’s deep, mellow, woody, spicy and smooth, it’s like the Isaac Hayes of flavour. Yet these are only the basic flavour notes, different varieties and points of origin grant yet more subtleties, rendering vanilla an endlessly busy collaborator. Though it’s classic role is in desserts, it also adds complexity and surprise to savoury dishes, beverages and perfumes.

The vanilla vine was first cultivated in the Veracruz region of Mexico by the Tontonaca people in around 1000 CE. The Tontonacan mythology that remains embedded in vanilla’s biography tells of the first plant rising from the blood spilled of forbidden love. The story goes that the Princess Tzacopanziza had angered her father by falling in love with the mortal Xzakanoxga, making off into the forest with him. When caught by the King’s priests, the couple found out the hard way that immortality had been revoked when they were beheaded. A vine (the Princess) grew from their final resting place, which cloaked itself around the trunk of a host tree (her lover).

That vine, is in fact a vanilla orchid, and the only orchid which produces anything of agricultural interest. As noted, the vine requires a host to raise itself off the ground and can grow up to 20m high in the wild if left unmolested. The orchid’s pale green flower produces a 5-10” fruit – a pod– that looks somewhat like a large, perfectly formed green bean, which explains the misnomer. This unassuming little miracle is the source of all the wonder, but only after a long process which brings it to life. 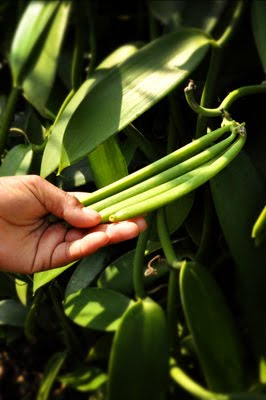 When green, the pod has no strong smell, though the flower is said to be sweetly fragrant. The pod’s volatile oils and compounds require not only maturation, but gentle drying before flavour develops. Traditionally, the drying process involves a combination of hot water and gentle sun-drying. At night the pods will be placed in blankets in airtight boxes to “sweat” or ferment, a key procedure in obtaining key flavour compounds. The pods are then stored to further develop their distinctive taste, darkening and shrinking as they do. When the moisture content has reached 20-30%, the pods will have lost up to four fifths of their original weight. This means 3-5kgs of fresh pods will yield 1kg of prepared product. The whole production chapter can take up to 8 months, and impatient global demand has resulted in practices which involve oven-drying and other techniques which produce a lower quality pod. The difference is easy to spot: good vanilla pods are slightly sticky, highly malleable and wonderfully aromatic.

Another predictable feature of good vanilla is that it not be cheap. Cost addition factors include significant moisture loss, long production periods and the big one, the need for hand pollination. Vanilla Planafolia is a troubled loner in nature, it can’t self-pollinate and the only insect with the know how is a native Mexican bee (not the one from The Simpsons) that evolved alongside the plant. This means that in most parts of the vanilla growing world, from Madagascar, to Fiji, to Indonesia, delicate pollination is tediously carried out by a worker who might be more skilled in Jenga or pick-up-sticks. This task, in combination with the fact the flower only lives for a tenuous one to two hours, gives a sound basis for its relatively high cost, second only to saffron in the spice world.

Still, we employ it in abundance. We use it for so many applications these days that it’s synonymous with conventionality, though this ungenerous equation has more to do with imitation essence than the real thing. Its spread across the culinary spectrum can be traced back to the apothecary (a kind of pre-pharmaceutical era pharmacist) of Queen Elizabeth I who suggested its use as a general flavouring agent and nerve tonic. Up until this time, vanilla was only used to enrich other New World ingredients such as chocolate and tobacco.

Nowadays, I use vanilla in desserts almost as commonly as I might use salt in savoury dishes. Vanilla’s way of mellowing yet heightening chocolate, adding bouquet to cream, or deepening the flavour of stone fruits makes it the first answer to most sugary inquiries. Should a pastry or dough seem eggy or floury on its own, vanilla imparts a congruous link between the obtuse flavours. Between this talent and it’s versatility, vanilla is extremely employable across many applications; this explains why Coke is the largest purchaser of vanilla in the world today, while fashion houses like Armani or Prada boast fragrances with vanilla as a base.

Yet where we most expect to see real vanilla we may well be disappointed. Industry insiders report that the tiny black dots in gourmet vanilla ice-cream are in fact exhausted bean specks, ground up pods that have already had full flavour extraction (vanilla essence or it’s imitation are used in conjunction to add the products heralded flavour). To me, this rather like serving a bone pulled from a beef stock, if marginally easier to swallow.

Sadly, outside of Veracruz it is hard to find fresh vanilla in Mexico today: as always, a sought after product will find it’s highest price. Never the less, good quality extracts are common and used in hot chocolate, pastries and the ever-present flan, a version of a crème caramel with Spanish roots. Still this simple and enchanting gift of nature travels most everywhere else. From the Napa Valley to Istanbul, from Tetsuya’s kitchen to your own local delicatessen. And herein lies the irony of the King’s command: it would seem the poor Princess Tzacopanziza has, in her own way, resumed her immortality. 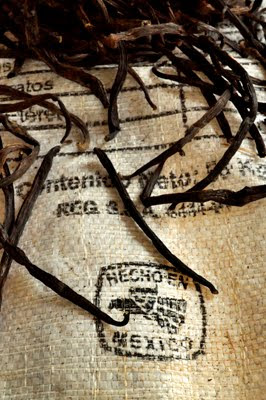 Posted by Travis Harvey at 2:07 PM