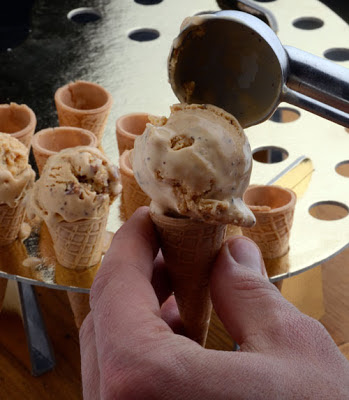 If you are not familiar with cajeta, the moreish, delicate and intriguing caramel made from goat's milk then this is a great way to get acquainted. Made by reducing goats milk with sugar until it caramelises, it is a more sophisticated version of the famed dulce de leche and is ubiquitous in Mexico where it may appear in the form of a paste on bread (something like nutella), a hardened candy lollypop or the ice cream as below.

It is such a distinct flavour, and takes me back to the Mercado 20 de Noviembre in Oaxaca where the helado stand always beckoned. This recipe has undergone a few incarnations, as I have tried to balance out the sour cream and milk to replicate somewhat the qualities of Mexican (or at least Oaxacan) milk, which is more complex and sour than Australian milk. Also I have settled on using store bought cajeta (though you can make your own), mainly because the concentration of sugar in frozen desserts must be quite precise to stabalise at a good consistency.

1.    Bring the milk to the boil in a small sauce pan.
2.    Add the vanilla and salt.
3.    Whisk the egg yolks until frothy then pour in half of the hot milk, mix through then return to the pan.
4.    Cook on a low heat until the mixture coats the back of a spoon. Pour into a bowl and add the sour cream and cajeta and mix through.
5.    Chill until mixture is at fridge temperature, then churn as per the instructions of your  ice-cream machine (the kitchenaid I used takes around 20 minutes). When almost fully set, add the pecans and decant into a chilled container. Freeze. Best served within 48 hours.