Diana Kennedy is often described as "the Julia Child of Mexican Cuisine". She has authored eight books and is recognised as the world's leading authority on Mexican food. Her most recent book, Oaxaca al Gusto was awarded the prestigious James Beard Cookbook of the Year award for 2011, and is one of the most determined pieces of work I have ever seen.

Hence, I was pretty thrilled to have the opportunity to cook with her in Sydney a few weeks ago, in a demonstration class at the Essential Ingredient Sydney. Diana prepared Sopa Tarasca tipo Conde, Camarónes en Pipian (recipe below) and a whole Barramundi in the style of Huanchinango a la Veracruzana. 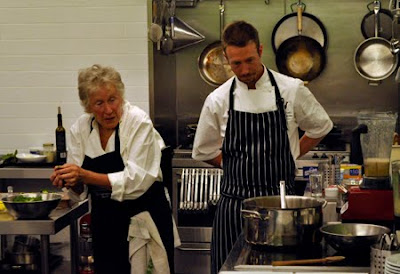 Mrs Diana Kennedy and myself, pondering the pot of prawns.

The food was all stunning, and her detailing of the process and concepts behind each step of the preparation. It was quite an eye opening experience over all. Not quite as eye opening as the next day, when my beautiful son Liam was born, a healthy 8 pounds and perfect. It has been quite a year.

The following recipe appears in The Essential Cuisines of Mexico by Diana Kennedy, published by Clarkson Potter/ Publishers, 2000.

1 teaspoon salt, or to taste

Shell and devein the shrimps and set aside. Put the shells, tails and heads, if any into a saucepan, add the water with salt and cook over a medium heat for about 20 minutes, to extract the flavour and make a light broth. Strain and discard the shells, reserving the cooking liquid. Allow the liquid to cool a little. Add the shrimps and cook over a gentle heat for about 3 minutes, or until they are just turning opaque. Drain the shrimps, reserving the broth.

In a heavy, ungreased frying pan, toast the pumpkin seeds lightly, stirring them often, until they swell up and begin to pop about-do not let them brown. Set them aside to cool and then grind them finely in a coffee/spice grinder. (Alternately they can just be added to the blender with the broth in the next step, but the sauce will not be as smooth.)

Place the shrimp broth, pumpkin seeds, cilantro, chiles, and onion in a blender and blend together until smooth.

Melt the butter in a heavy saucepan. Add the blended pumpkin seed sauce and cook over a very low heat, stirring and scraping the bottom of the pan constantly, for about 3 minutes. Stir in the sour cream, adjust the seasoning and just heat through-about 3 minutes. Then add the shrimps and heat through for another 5 minutes. The sauce should be of a medium consistency. Serve immediately.

Serve with fresh, hot tortillas or crusty French bread. Despite the temptation to do so, it is better not to serve it on top of rice or all that lovely sauce will be sopped up and lost.

NOTE: This pipián can be prepared ahead up to the point of adding the shrimps. I do not suggest freezing this dish. 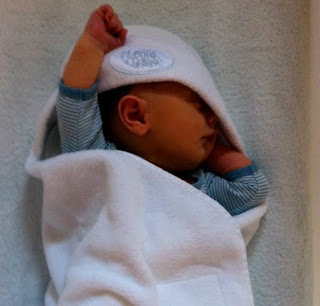