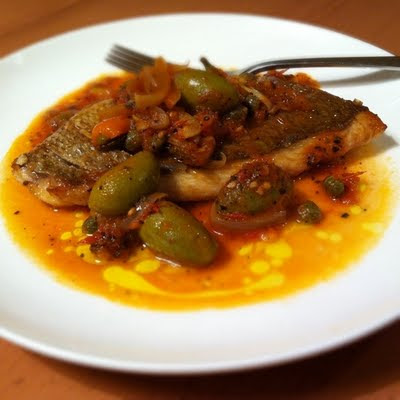 Veracruz lies nuzzled in the southern part of the Gulf of Mexico, not too far away from Cuba and Hispaniola from where Cortéz sailed in 1519. The area was one of the first conquered by the Spanish, and has long had quite a distinct character, as I suppose so many port cities do. The mix of the indigenous history, European culture, African slave elements and even the strong ties to Cuba's recent history make this a fascinating place.

The heat of the city in June is pure oppression, with the pavement scorching and baking, and helados half-melted before they are even paid for. My first trip there, I resolved to spend evenings in the Zocalo watching elderly couples dressed in white dance like swans, as I waited until it had cooled enough to consider a meal.

So around 10 o'clock every night, Juanita cooked for me in her little restaurant two blocks from the square. She gave me this recipe, which varies little from many others you might find in any given book but for the fact she chars the tomato to begin. Also she preferred a single red chillie, rather than a pickled jalapeño as is more commonly used (incidentally, jalapeños are from Veracruz state, and named after it's more northern city, Xalapa).


*My snapper was a little monster and wouldn't fit in the pan, so I trimmed the fillets off. It's not as hard as it looks: Use a sharp knife to cut into the fish near the backbone, then just slowly follow the contour of the bones, peeling the fillet back as you go. If you get stuck, change direction and keep cutting until you have removed it cleanly. Flip the fish over and repeat the process. You may find the second try will be a little easier, but just go slowly and please, use a sharp knife or you will just destroy the little fellow. Pictures of my simple process below.

**To cook fillets, seal the flesh side first after seasoning well. When nicely coloured, flip over gently and cook skin side until crispy. Remove from pan to a plate, cook the second fillet the same way, then remove. Follow step 5 of the above recipe, but reduce the sauce a little further, then pour over the fillet. 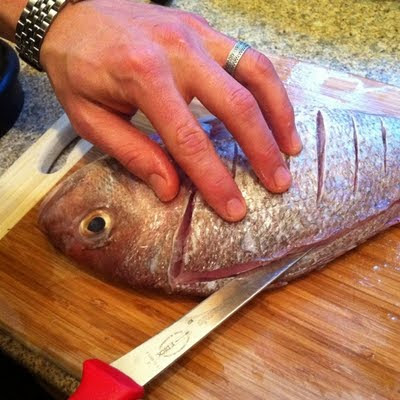 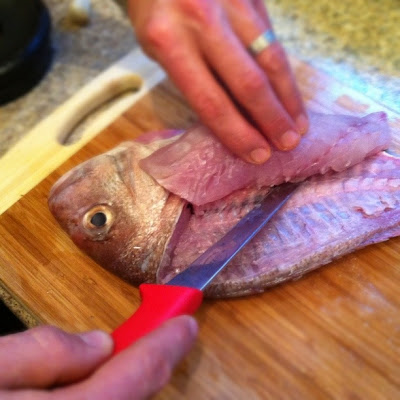 Cut in slowly along the backbone, peel the fillet away so you can see the bone you are cutting the flesh from.
Posted by Travis Harvey at 2:39 AM