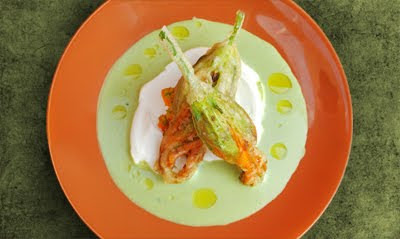 This week, since I was thinking about pumpkin flowers, seeds and all things squashy, I had a play around and came up with this. It's a snack, if somewhat elaborate, and it was quite good. Crisp squash blossoms stuffed with braised pork, on whipped crème fraîche with pumpkin seed sauce.

The pork shoulder was marinated mainly in thyme, garlic and orange juice for 24 hours, slow-cooked for five, pulled apart then cooked down in its juices with confit onion, tomato, raisins and a little olive oil. Stuffed in to the flowers, battered and fried then served with the crème fraîche and the pepian sauce: an emulsion of toasted pumpkin seeds, olive oil and herbs and a few other things.

This lovely nutty, smooth and bright sauce has a balance of the sweet roasted garlic, slight piney notes from the pumpkin seeds and a clean lingering finish from the crème fraîche and olive oil. I would think it a most appropriate accompaniment to simple grilled chicken or even fish such as John Dory or Blue Marlin. The simple recipe is as follows. 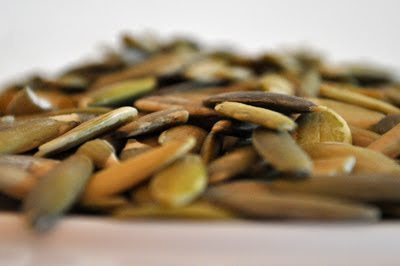 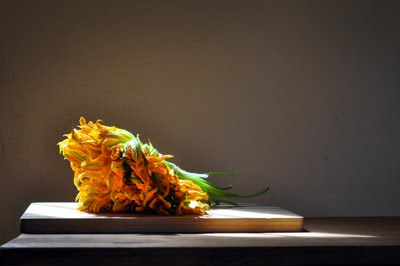 So, let's talk a little history of the little seed and it's fruit. Pumpkin, winter squash, or calabaza is one of the more under-sung ingredients native to Mexico. I guess it's not as glamorous as vanilla, as exciting as chili, as addictive as chocolate, or as employable as tomato. Yet this flowering gourd is one of the largest crops in the US (production in 2008 in the major pumpkin growing states was over 1.1 billion pounds–half a billion kilograms), and it has become a staple in the diets of cultures worldwide. Middle eastern, Indian, Italian and Thai culinary idioms all now boast traditional preparations of pumpkin, in fact, it's even big in Japan, as Tom Waits might say.

The genus Cucurbita covers a family which includes pumpkin, zucchini, cucumber, melons and inedible gourds which have historically been dried and used as storage receptacles (or musical instruments). In pre-Columbian Mesoamerica, even the edible pumpkin were used for their fibrous flesh, thin long strips were sun-dried and woven into mats. Centuries later, American colonists in the north scooped the seeds from large pumpkins, filled them with milk, spices and honey before roasting them on open coals. This bit of guerrilla cookery would eventually evolve, and become one of the–nowadays fairly established–colony's most loved and traditional desserts: the humble pumpkin pie.

The discarded seeds from the first pumpkin pie might well have been put to good use. One can only imagine that a fledgling colony would value highly this rich source of protein, manganese and magnesium. Pepitas are often regarded as one of the world's healthiest foods, a category which rarely crosses over into the world's tastiest, but here we have a clear exception. The nutty, clean and sweet notes of the seed are so versatile, working as either a leading flavour or as a base for brighter or more pungent ones.

My introduction to Pepita's variety of applications came whilst living in Guatemala in the form of Salsa Pepian, one of Karin's favourite recipes and one we will cover a little later in the blog. Another Mayan preparation of the seed constitutes Xikil Pak, a dip made from the paste of toasted pumpkin seeds, tomato, lime and habanero chili. It's pretty amazing. For the moment, try the above sauce, as prescribed. It sings of both Spring and Autumn so it's perfect for this time of year regardless your hemisphere.

This is the first of my own recipes that I've posted here at the blog, and it should be noted that this is not a traditional Mexican dish. It is submitted as an entry to Weekend Herb Blogging, an event that focuses weekly on a different herb, fruit, vegetable, grain, nut, seed, spice, flower or plant. Hosting this week is Prof. Kitty, who is cooking and playing tunes from her Cabinet. Sounds cool? It is. Click here to find out more. 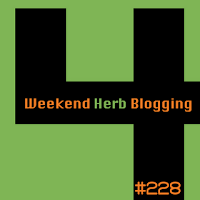 If you'd like the recipe for the braised pork filling for the flowers, drop me a line at
travis AT delatierra DOT com DOT au
Posted by Travis Harvey at 10:17 PM