And now, for something completely different... 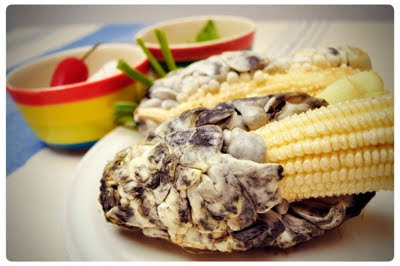 This is the Mexican black truffle. A fungal spore known here as cuitlacoche, known in the States as corn smut (or ustilago maydis to your agriculturist), known to the Aztecs as "sleeping excrement"*. It's as remarkable in flavour as in appearence, musty and sweet, toothsome, and possesing the singular quality of the umami chain of amino acids. Though it now fetches high prices both here and abroad, featuring seasonally on high-end restaurant menus, it is common to hear stories of times when there was little more to eat and pounds of cuitlacoche would be consumed day after day.

It has long been a major blight upon the corn industry in the States, where decades of work have gone into working towards eradication. During that research, it was discovered that ustilago maydis serves as a model organism for research due to its yeast-like proliferation. In addition, because the cellular structure of fungus shares properties with human cells this research led to a discovery of synthesis-dependant strand annealing. In common English, this is to say that cuitlacoche revealed the process of DNA repair. How bout that? 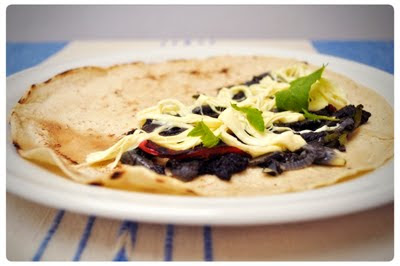 I use mine for hunger repair. Sauteed with a little butter and shallots, salt and chicken stock for around 10 minutes, stuffed in a tortilla with quesillo and epasote. As my Chef used to say, "get the best ingredients you can, then do as little as you can to them."

Stay tuned for a visit to the mushroom festival in Cuajimaloyas at the end of the month. Happy eating.

* A term reserved for young politicians in Australia.
Posted by Travis Harvey at 9:27 AM