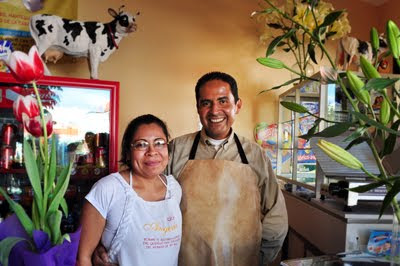 Isabel and Mike at Queseria Angelita.

San Felipe del Agua is our neck of the woods in Oaxaca, and there's no denying that it's the ritzy end of town. We'd had visions of living in a very simple neighbourhood, possibly tending corn in our own milpa, milking "Daisita" every morning or even more rustic Mexican tasks, but it was simply not to be. We really had to look for a furnished place, since living in a house without furniture is called squatting, and writing a Mexican Food blog without the internet is just called hopeful.

So we ended up here in quaint San Felipe, half an hour from town but only two flights of stairs from the best little tienda in, well, maybe the world. I've never been fortunate enough to live too near a corner store before, at least not one that sold anything more than phone credit and cigarettes. As if to make up for all these years of misfortune I've now got Queseria Angelita, a dangerous place that has the best cheese, coffee, chorizo and pastries in town. And thankfully (I think) we have an account that only needs settling once a week, so until each Saturday comes the only thing I have to worry about, is how long it'll be until I move up a pant size.

Queseria Angelita's San Felipe store is owned by Isabel Victoria and Mike Vasquez. The couple moved to Mexico from San Diego about a year ago. Isabel had left her native Oaxaca nine years previous to live in San Diego, so when the US economy gave them a gentle nudge southward in 2008, it made sense to sell it all and follow the dream of a simple life back home, selling cheese, working hard, but working for themselves. They used Isabel's family contacts to get set up in the cheese business, and were lucky in that the contact was with one of the regions finest quesillo makers, Etla's original Queseria Angelita.

Half an hour north of Oaxaca, Etla is a small town whose seven-and-a-half thousand inhabitants are all about milk, and Angelita's leche is about as good as it gets. The bulk of that milk is used to produce Mexico's finest quesillo, a mozzarella style cheese made by souring, fermenting, curdling then streching the curd. The cheese is then wound into balls, later to be shredded by hand and added to any number of dishes. The current cheese heiress, Mago Arango Hernández, told me her grandfather started making Angelita's quesillo in Etla 60 years ago, and as his reputation for quality grew he found it impossible to meet demand. He returned to Etla, and offered his neighbours an opportunity to either produce milk or manufacture cheese, whilst learning the cheesemaster's production techniques. As a result, 17 families now put food on their table by helping produce the half a tonne of quesillo that Angelita turns out each day. 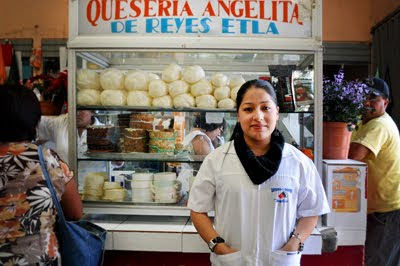 Mago Arango Hernández with a quesillo and queso fresco backdrop at the Mercado IV Centenario in central Oaxaca.

And what a cheese. For a time I worked as a fromager in Australia, and I would be remiss not to throw my professional hat in the ring and declare quesillo to be one of the finest young cheeses in the world. Lactose-sweet from high quality milk, tangy, salty and with 40-50% milk fat, it is simply luxurious. It has a wonderful melting texture like a tightly curded Fior di Latte, and a clean finish rarely found in such high-fat products. 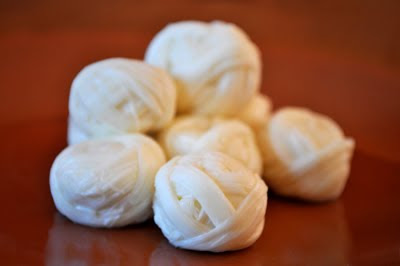 Oaxacan treats: tiny balls of quesillo, wound up and ready for kids (and Australians, it would seem) to snack on.

The thing is, quesillo is just one draw card at Queseria Angelita. I mentioned the coffee: a deep fragrant blend, organically grown and roasted in Oaxaca by communities with the support of Sustainable Harvest. The Sustainable Harvest group work to connect small organic growers with buyers and roasters, keep the product local and maximising profit for small communities of indigenous people. It is a for-profit social enterprise that directs that profit into the hands of the people who work for it, rather than multinationals and industry bigwigs who recline in a world of tax-breaks and bailouts, leaving actual producers in poverty.

Mike and Isabel keep a small but exceptional range of meats too. Chorizo, tasajo, carne enchilado and more, all from the same Oaxacan butchery that has been in business for over 50 years. Besides the recipes for the marinated and treated products being so tasty, the meat remarkably deep in flavour, tender and fresh. The reason why would make even Hugh Fearnley-Whittingstall proud.

Natural and humane practices in meat production are neither routine, nor remarkable in Mexico. Though cows are not read bedtime stories or knitted scarves, a considerable amount of them are reared out of the misery of feedlots, and consequently don't require heavy doses of antibiotics to stay alive till slaughter. (Of course there are exceptions. Walmart and similar enterprises are booming in Mexico, and much of their meat is sourced from the US then processed here by companies such as Granjas RYC in Puebla. Cheap meat from the North is pretty bad stuff: over 70% of all antibiotics produced in the US make their way into the cattle's diet.) Still, the quality of varies quite a bit and the products that Isabel and Mike offer are quite exceptional. Their supplier takes time between phases of production, allowing the animals to stay relaxed and healthy to experience a naturally paced cycle of existence, resulting in a high quality of meat.

This was meant to be just a few words about a little shop owned by the nicest people we know, but in thinking about what Mike and Isabel are doing, I realised something else. The products they have chosen–and the people they support by proxy–are so remarkable because they have been chosen sincerely, not to the ends of higher profit-margins or following trends. 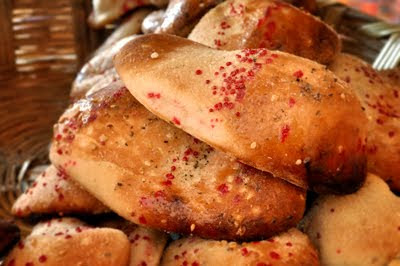 Ojaldras, which Mike describes as "Oaxacan donuts". Only a select few stores have traditionally made ojaldras, low in sugar and baked daily in a woodfired oven. Of course, Angelita is one of the few.

In a cynical age (and I'm a cynical guy), food trends so often represent a lack of sincerity, like how organic has flailed in the face of local ("darling, you know organic is simply dead! I only eat bio-symmetrical liver-cleansing alfalfa grown within a hummingbirds flight! Still love my KFC though darling, well Oprah eats it!"), or how butchery courses and pig killing have become a weekend pastime for New York lawyers and execs. All of these issues are worth thinking about, and I'm not trying to be dismissive or judgemental. After all, I only have to walk downstairs to partake in ethical trading and it's much harder for most. But Isabel and Mike have chosen quality over all else, which is a very Mexican attitude towards food. And through this they support local communities and provide our community with clean, healthy food and so much more. While Walmarts and purely profit-driven monsters continue to pop up around the globe, it's nice to be able to celebrate the smaller guys who have a bigger heart. Did I mention how nice they are?
Posted by Travis Harvey at 12:45 PM